Oonn ransomware is a very hazardous kind of computer threat that makes user’s files inaccessible. This crypto-virus was designed to lock all important data with a sophisticated algorithmic pattern and demands ransom payment in order to restore them to previous format. This decryption technique carried out by Oonn is a military grade type of technology, which is very difficult to decipher without the matching decryption tool and private key combination.

Majority of computer users are still not aware that Oonn rasomware is spread via spam email messages. It arrives on the computer as an attached data to maliciously crafted email messages purporting to be from a prominent organization. The misleading email normally bears a subject about business inquiry, product quotation, banking transactions, and similar. The context was made to persuade recipients into accessing the attached file, which is actually an Oonn ransomware executable file masking as document data.

Once the email file is opened, Oonn ransomware immediately kick offs sequence of attacks that starts with the dropping of malicious files on different folders especially on system directories. It also manages Windows registry and creates an entry that purposely runs Oonn ransomware during start-up. Next, the virus begins the hunt for common files like documents, images, pictures, videos, spreadsheet, drawings, archives, databases, and so on. Oonn ransomware encrypts them with complex method and at the same time, it appends them with .oonn file extension. Lastly, the threat generates a ransom note explaining the current attack as well as instructions on how victims may be able to obtain the Oonn decryption tool and private key. 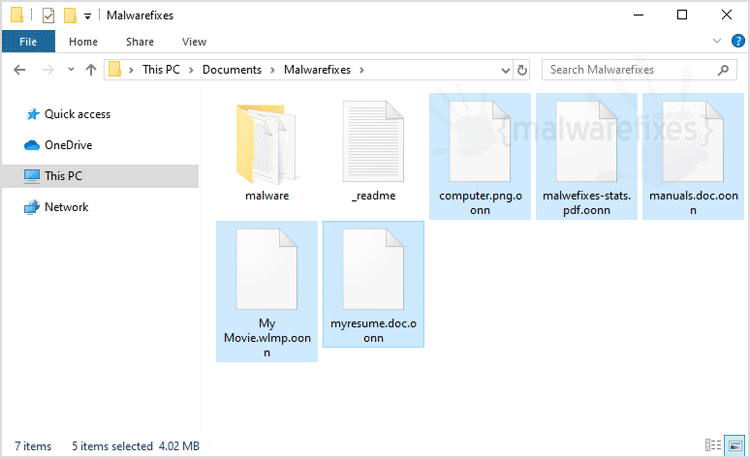 Similar to its predecessors like Kook, Kuus, and Pykw, Oonn ransomware also demands $980 as payment for decryption tool. Victims are required to pay the ransom only on assigned channels where there is no way to track the attackers. Having said that, it is risky to deal with makers of Oonn ransomware as they can afford to run away after receiving the payment. For this reason, malware researchers do not recommend to transact with hackers and advise to just backup the encrypted files and wait for free Oonn decryption tool.

How to Remove Oonn Ransomware

Ransomware files are placed deeply into the system and on various locations, thus, thorough scanning is vital to totally remove Oonn virus. Aside from our suggested tool, you may also run your own security program.

Though affected files may be impossible to decrypt due to complexity of the encryption, you can still try recovery method like alternative tool, Shadow Explorer or Previous Version as described below.

To remove Oonn automatically, scanning the computer with this efficient anti-malware tool is suggested. This scanner does not just uncover known threats like viruses or malware, it is also effective in discovering hazardous ransomware like Oonn.

2. After downloading, install the program. It may run automatically or you have to double-click on the downloaded file MBSetup.exe.

3. Carry out the installation with default setup process.

4. After the installation process, click the Get Started button to launch the program.

5. Continue with the prompts until the main program opens.

6. On the main console, click on Scan to run most complete detection method to find hidden objects associated to Oonn ransomware.

7. Scanning may take a while. Please wait until the anti-malware tool is done with the checking.

8. Once the scan has completed, the tool will display the list of detected threats. Remove all identified malicious items and restart the computer if necessary. 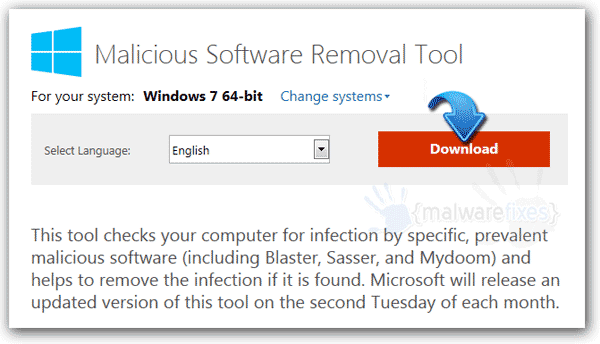 2. The tool automatically checks the operating system and suggest appropriate download version. Click on Download button to begin. Save the file to a convenient location, preferably on Desktop.

3. After downloading the file, Windows will prompt that download has completed. Click Run to start scanning for Oonn ransomware. Another option is to browse the location folder and double click on the file to run.

4. The tool will display Welcome screen, click Next. Please note the message "This tool is not a replacement for an antivirus product." You must understand that this program is made specifically to find and remove malware, viruses, Trojans, and other harmful elements on the computer. It was not designed to protect the computer. 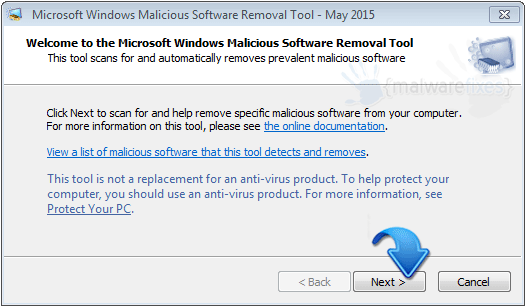 5. Next, you will see Scan Type. Please choose Full Scan to ensure that all Oonn ransom virus entities and other harmful files left on the computer will be found and removed. For advanced computer user, you can opt for Customized Scan, if there are other drives or folders you wanted to include in this scan. 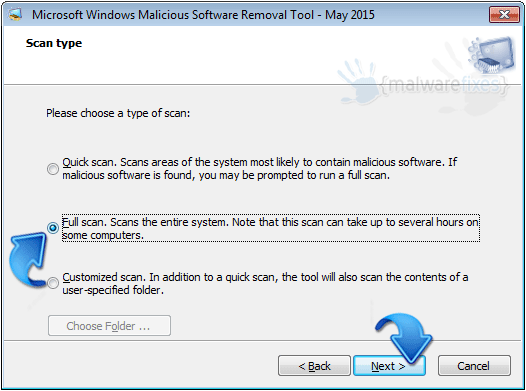 6. Full scan may take a while, please wait for Malicious Software Removal Tool to complete the tasks. However, you may cancel the scan anytime by clicking on the Cancel button.

7. After scanning, the tool will reveal all identified threats. There may be other threats that our first scan fails to detect. Please remove/delete all detected items.

8. When removal procedure is complete, you may now close Malicious Software Removal Tool. We hope that Oonn ransomware have been completely deleted from the computer. Please restart Windows to proceed with the normal operation.

Emsisoft Decryptor for STOP Djvu will work only if affected files were encrypted using Offline Keys. Oonn ransomware uses the alternate Offline Keys during encryption if there is a problem encountered while communicating to a remote command-and-control server. Follow the guide to start recovering .oonn encrypted files.

2. Download Emsisoft Decryptor for STOP Djvu from this archive page.

3. Right-click on decrypt_STOPDjvu.exe and click "Run as Administrator". Windows may prompt "Do you want to allow this app…" just click Yes to continue.

4. By default, the tool will pre-populate the locations where encrypted files were identified. To include other directories, simply click Add Folder button.

5. To start recovering files infected by Oonn ransomware, click on Decrypt button to start the procedure. The interface will display status of the current decryption process. 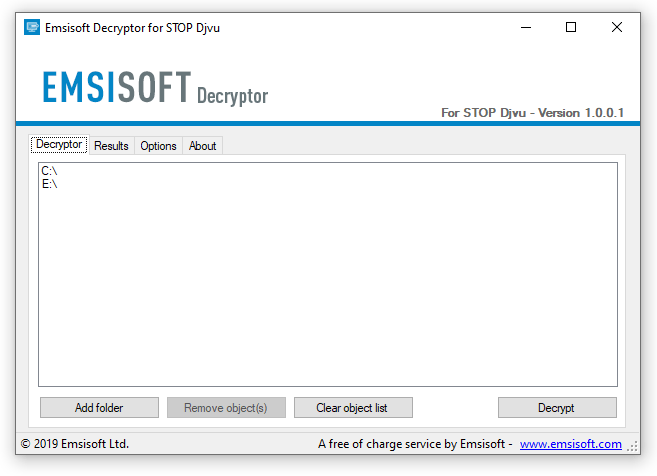 We will update this section once the full decryption tool is on hand. In the meantime, please try other options below if the above procedure is not not effective.

Windows Vista and Windows 7 have a feature called Previous Versions. However, this tool is only usable if restore point was made prior to Oonn ransomware infection. To use this tool and recover files affected by the virus, please follow these steps:

1. Open My Computer or Windows Explorer.

2. Right-click on the affected files or folders. From the drop-down list, please click on Restore previous versions.

3. New window will open display all backup copy of files and folders you wanted to recover. Choose the appropriate file and click on Open, Copy, or Restore. Restoring selected files overwrites the current encrypted files on the computer.

Option 2 : Use ShadowExplorer to restore files encrypted by Oonn Ransomware

Just like Previous Version tool, ShadowExplorer is taking advantage of shadow copy created by Windows. This tool allows you to retrieve older version of files before it was encrypted by Oonn ransomware.

2. Install the program with the default settings.

3. The program should run automatically after installation. If not, double-click on ShadowExplorer icon.

4. You can see the drop-down list on top of the console. Please select proper drive and the most recent point-in-time shadow copies of files you wish to restore prior to Oonn ransomware infection.

5. Right-click on the Drive, Folder, or File you wish to restore and click Export…

6. Lastly, ShadowExplorer will prompt for location where you want to save the copy of recovered files.

Go to mobile version
We use cookies to ensure that we give you the best experience on our website. If you continue to use this site we will assume that you are happy with it.Accept